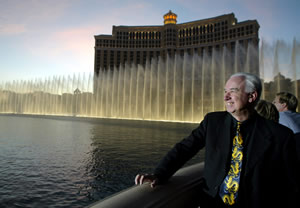 Ph.D. is from the University of Missouri-Columbia. Thompson has served on the faculties of SE Missouri State, Western Michigan University, and Troy State University (Europe). He was honorably discharged from the United States Marine Corps and Missouri Army National Guard. He served as a Research Associate with the National Association of Attorneys General (co-authoring State Attorneys General and the Environment, 1974, New Issues Press) and as a Research Advisor to the Administrator of Pension and Welfare Benefits Programs in the U.S. Dept. of Labor. For two years he was the elected Supervisor of Kalamazoo Township in Michigan. He captured his experiences there in the 2009 book, written with James Leidlein, titled Ethics in City Hall (Jones and Bartlett). Since coming to Nevada in 1980, he has been actively studying public policy and gambling. He and John Dombrink of the University of California-Irvine were gaming consultants to the President’s Commission on Organized Crime. The two collaborated in writing The Last Resort: Success and Failure in Campaigns for Casinos (U. Nevada Press, l990) and also consulted for the National Gambling Impact Study Commission. His articles have appeared in numerous publications, including the Annals of the American Academy of Political Science, Indian Gaming, Journal of Gambling Studies, Casino Executive, Gaming Law Review, Casino Lawyer, and International Gaming and Wagering Business. He has lectured extensively on the topic of international casinos, and he wrote a 45-article series for the Las Vegas Sun on world casinos. He co-authored Casino Customer Service=The WIN WIN Game with Michele Comeau (Gaming and Wagering Bus., l992, 1996); he is the author/editor of the International Encyclopedia of Gambling (2010), Gambling in America: An Encyclopedia (2001), Legalized Gambling: A Reference Handbook (with the ABC-CLIO) (1994, 2nd ed 1997), Native American Issues (with the ABC-CLIO) (1996 and 2004) , and International Casino Law (with Tony Cabot) (4 eds, Inst Gaming, University of Nevada, Reno, 1991-2008). He consulted with the Wisconsin Public Research Institute, co-authoring: The Economic Impact of Native American Casinos in Wisconsin (1995), The Social Cost of Gambling in Wisconsin (1996), Crime and Casinos in Wisconsin (1996), and Not Exactly “A Fair Share”: Revenue Sharing and Native American Casinos in Wisconsin (2002). Other books include Over the Top: Solutions to the Sisyphus Dilemmas of Life, and Heartlines and Lyrics (both co-authored, Author House, 2003, 2004), plus a CD, Heartlines and Lyrics, 2010.